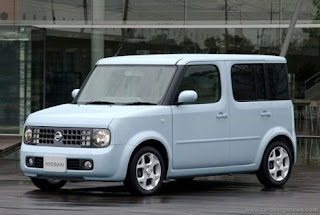 Most of my writing dwells in the digital spectrum -- computers, handhelds, music players, phones, and sundry gizmos; usually because they come in such varieties, do such a number of often amazing things, keep changing so frequently, and are often pretty and shiny to look at.

But before I even knew about the existence of computing, I was interested in automobiles (and before that, airplanes, but we'll visit that some other time). Not the innards of automobiles as much -- engine power, axles, transmission ratings, and so on -- but on external appearance, styling, ergonomics, design and all that kind of stuff. I was partial to sports cars, especially the Italian kind, and would spend hours at the British Council Library in Bangalore after school gazing and drooling at glossy pictures of such objects of technolust in magazines with names like Autocar (which bills itself as the world's oldest car magazine). Now these are pretty and shiny things too (and so are fighter airplanes), so you might observe a pattern here.
I like elegant and beautiful, but I'm also tickled by unusual and innovative. So here is the Nissan Cube (NYT: Bulldog in a box, in shades), a very odd sucker if there were one. The Cube belongs to a genre of boxy cars that emerged in Japan over the past decade (including the Honda Element and the Scion xB from Toyota). These homely-looking boxy cars make a lot of sense in space-starved Japan, especially in Tokyo, where pod and coffin-like capsule hotels offer the very minimum of accommodation for the weary traveler. A boxy shape maximizes space availabilty on a short chassis and thereby provides the as much space (and as little claustrophobia) for passengers.
Americans, accustomed as they are to an expansive lifestyle where bigger is better, and where the roads are ruled by hulking behemoths far more at home on a battlefield, haven't taken well to such toy-like Japanese creations -- in the past, anyway. But systemic changes have a way of changing people's minds. The Oil Crisis of the 1970's drove Americans away -- permanently, it appears, in retrospect, with both Chrysler and General Motors filing for bankruptcy, Chrysler for the second time in nearly three decades -- from boat-sized American cars and into the relatively cramped seats of the somewhat pleasantly surprised Japanese auto vendors. Three decades helped Americans forget the crisis, leading them to fall in love with large, gas-guzzling assault vehicles, but the current recession (preceded by the sharp rise in oil prices in 2008) is kicking them of the habit once again. With job losses a plenty and the end of the recession nowhere in sight, Americans may once again appreciate the benefits of homely-but-practical.
There aren't any boxy vehicles coursing the streets of India -- yet; but Indians are famously pragmatic people, willing to trade looks for concrete benefits: case in point, the Hindustan Motors Ambassador, a 'timeless classic' if you will, ugliness that only a mother can love, but who cares, it does its job, and it has a cavernous trunk. And nobody stuffs more people into vehicles better than Indians: autorickshaws ply the streets with as many a dozen children in them. Boxy vehicles would likely do well in India: not with the cool, hip, young urban professionals, but there is a huge market beyond them.
Are you listening, Nissan, Toyota, Honda?