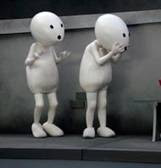 It was confusing first, and became annoying fast, but as they kept changing the plot and characters I found myself being drawn in. Now I look forward to seeing what they'll do next. They, of course, are the so-called 'Zoozoos' in the Vodafone TV commercials being aired during the IPL2 cricket tournament. We had this debate at home as to how they made the commercial and I was certain that it was all computer-animated. Now my student Ashish Bhanu Sharma posted a message where the truth was revealed -- the Zoozoos are real, live human beings (mostly women and children) dressed up in synthetic material to look near-identical and toy like. And the entire background is set up to make the scene look cartoonish and the characters look much smaller than lifesize.
The plots are both very creative and easily connect to people from any culture -- at least, urban culture. And the characters speak a gibberish language whose import is easily learned by the tone of voice as well as context. In a nation like India with 22 official languages, this is a excellent ploy.
I find myself looking forward to each new episode, wondering what they will do next. Many posts online suggest that Vodafone's service leaves much to be desired, but at least their commercials have found one loyal and eager viewer. Each episode is supposed to illustrate a type of service that Vodafone offers. I'm not sure that that objective is achieved; I find myself focused on the ad itself and miss the text that follows which describes the service. Says Chief Marketing Officer of Vodafone India, Harit Nagpal:

“We’re acquiring customers at a very fast pace, but a large number of them are unaware of the range of services we offer. I mean, ‘phone backup’, which we’re advertising now, was launched two years ago, for instance!”

Wishful thinking. The connection between the plot and the service is implied but not immediately obvious. But let's focus on creativity and innovation, which is what this blog's about. There is creativity in development of these characters, they way their suits were designed, the sets as well the varied plots, and the gibberish language. Ad film maker Prakash Varma describes how the body suits were designed:

“It took me three weeks of pre-production to understand how it will work,” says Varma. There were two fabrics that were considered for the body suits, and one was rejected for it had too many wrinkles and was shiny. The wrinkles would have shown when the characters moved, thereby shattering the illusion of animation. “So we chose the more practical, thicker fabric,” Varma explains.
The production team divided the outfit into two parts: the body and the head. The body part of the outfit was stuffed with foam in some places, while the head was attached separately. To make it look bigger than a human head, a harder material called Perspex was used, which in turn was stuffed with foam (with scope for ventilation).
If one wishes to understand the size of this head, here’s a fact: a human head would typically reach up to the mouth level of this giant Zoozoo head. “We kept the hands and legs thin, which is why we cast women – and occasionally children – wearing the costumes,” says Varma. The thin limbs, contrasted with big bellies and a bulbous head, all add to the illusion that these creatures are ‘smaller’ than humans. Sets were created to suit the size of the Zoozoos.
Cinematically, this ‘size’ was a trick: the creatures look smaller than they actually are on screen, to portray a different world of sorts. For this, the speed of shooting was altered: Nirvana shot it in a high-speed format to make them look the size that they do.
Furthermore, simple sets/backdrops were created and spray painted with neutral Greys – a colour of choice so that attention isn’t diverted from the main characters. For a supposedly ‘outdoor’ shot, even the shadow of a Zoozoo was kept ‘live’ and not done in post production: it was painted in a darker shade of grey on the ground. An even lighting was maintained throughout.

But let's focus on creativity and innovation, which is what this blog's about. There is creativity in development of these characters, they way their suits were designed, the sets as well the varied plots, and the gibberish language. Will ads increase revenue for Vodafone? I don't know, but certainly, they will reinforce and increase brand image and recognition, and besides, delight at least some viewers. Who knows how many other creative initiatives will be launched by minds stimulated by the antics of the Zoozoos?