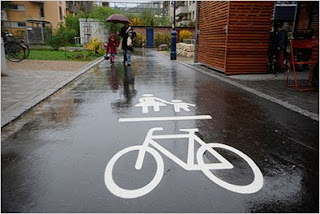 And now, a report from the New York Times on Vauban, a modern township in Germany that is designed to be automobile-unfriendly. You read that right.

The writing has been on the wall for a while, in big, bold letters, but like a lot of graffiti, has been resolutely ignored by passersby, lost in their own thoughts, and pursuing their own busy lives: the automobile, once a solution to a growing problem, has itself transmogrified into a festering sore of its own. Not in appearance, of course; the automobile has long been an object of technolust, and canny manufacturers have spared no efforts in turning this functional device into a work of art as well as a psychological prosthetic, relentlessly feeding this 20th century fetish. An automobile is not merely something that transports one efficiently from Point A to Point B; employing extensive social and cognitive science research by pointy-headed academics, it has been been transformed into a statement of the owner's personality, an extension of his ego, a crutch to overcome insecurities, and a daily reinforcement of the knowledge that he finally has arrived. Plus he now has the opportunity -- at least in India, as long as income inequities persist -- to employ and lord over yet another class of serf, the driver.
The advent of automobiles has permitted human settlements to evolve into vast sprawls which can no longer be feasibly negotiated on foot or through non-motorized transport. And the below par nature of any available public transportation makes the automobile among the top items on the shopping agenda of an upwardly mobile aspirant.
So now the streets -- where they exist in any form at all -- are clogged beyond capacity and it takes even longer to get through town. Practically every day, one encounters ambulances, their sirens -- and quite likely, the relatives of patients inside -- wailing loudly, standing frustrated in gridlocked streets, unable to make it through to their destinations quickly. As with many technological solutions to complex human problems, the cure is turning out to be worse than the disease.
It's a jungle out there. One fears for the lives of loved ones, especially children and elderly relatives who might seek to go out of the house for one reason or another. It's no longer safe to step out of the home, for one may never return in the same state of health. This just isn't a way to live; that which used to serve our needs has become our cruel, tyrannical overlord. And we all appear to be trapped in a vortex from which there is no escape.
Thing is, our cities -- Indian cities, anyway -- were not designed originally for automobile traffic. They don't like the noisy, aggressive, and frequently violent and bloodthirsty beasts, but have to put up with them for they rule. What if we were to redesign our cities so that we not only don't need automobiles, but we also provide no space for them? That seems to have been thesis driving Vauban's creation.
More than cities in the West, it is countries like India that a great opportunity awaits: Western lifestyles are highly dependent on the automobile. In India, however, only a relatively small fraction of the population can afford automobiles. The vast majority of Indians are accustomed to using public transportation. Unfortunately, the vast majority of Indians aspire to own their own private transportation, not the least because of the largely inefficient, erratic, overcrowded, uncomfortable and often brutish experience of riding public transport. Indians are largely frugal by habit, and if a comfortable, reliable, efficient, convenient and relatively economical alternative were available, most likely would opt for it, if only to avoid the horror of ploughing through the nightmarish streets. The street on which I live is extremely crowded and deafeningly noisy during the day and much of the night. I would kill to live on a quiet, uncrowded street where I would not worry about my parents or son getting knocked down. A residential area where most amenities are not only within walking distance, but the walk itself is pleasant and relaxing would do wonders for individual and community health. Where I live now, there is no central area, a forum, where people can come down in the evening, chat, watch others, and just relax. This sort of thing is essential for all human settlements, especially to build a sense of community. In societies where the automobile rules, people don't get to mingle as much as they ought to, and this only exacerbates the sense of alienation that afflicts urban living.