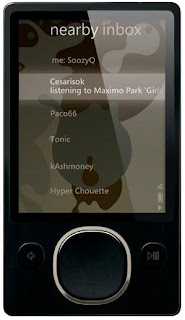 Yes, I indeed intended to say disrupted, not disruptive. The Zune was one of Microsoft's classic market follower strategy gambits. The original IBM PC was a classic disruptive technology or a disruptive marketing/business innovation (since there was little in machine itself that was new or different). The PC was a watershed introduction for IBM -- under the benevolent gaze of the late Phil Estridge, the entire machine was designed at a remote, isolated IBM facility in Boca Raton, Florida using off the shelf parts, nearly all of which were sourced from vendors other than IBM itself. The PC did much less the existing business computers of the time, but it cost much less too, and so it stealthily entered the market without seeming to be a threat to other business computer (as opposed to personal computer) vendors and steadily ate into and destroyed entire existing categories of computer markets and suppliers (e.g., minicomputers).

While Microsoft has established one of the most reputed computer research facilities in the world, stocked with the finest minds anywhere, the business side of the company specializes in following, rather than leading the market with new products and paradigm shifts. Practically every one of its successful market introductions rode on the coattails of existing products from competitors that had painstakingly created the market in the first place. Microsoft has been the king of Me-Too. In most cases, it has succeeded using a variety of variations on the Market Follower strategy. In some cases it would blanket the market with its product using its better access and distribution strength, and thereby establish its product as the standard. This happened in the case of Microsoft Word. Windows was clearly a disruptive market follower strategy: it did less, was not quite refined, but it cost much less too, compared to the Apple Macintosh in whose image Windows had been created. There was a large market for a Cheaper Macintosh, and Windows eventually trumped (and nearly made extinct) the Mac.
Microsoft reverted to its Better Channel Strength strategy with its Windows Mobile (formerly Windows CE) platform and was able to edge out Palm that had actually established the market for handheld PDAs in the first place.
And it thought it would succeed again against the Apple iPod (as it did with the Mac) when it brought out the Zune. It didn't and it still hasn't, and it likely never will. What went wrong with the Zune? Why did it join the ranks of disrupted, rather than disruptive innovations and technologies?
Portable music players (or, Personal Media Players, or mp3 players -- an ever-evolving array of terms is used for these devices) are as much a functional tool as a lifestyle product. Lifestyle products are objects that their owners deeply, personally identify themselves with, and use them partially as visible indicators of their personality, attitudes and preferences. Vendors of lifestyle products, like Apple, understand this, and work hard to establish and maintain the lifestyle associations through advertising and marketing campaigns as well as associated props, structures, events and processes. Lifestyle associations are very strong and can trump functional aspects of products and services. Two products or services may be identical in terms of functionality or technical quality but may project very different meanings and evoke radically different emotions among their owners and in people in general. Sports cars, especially those from well-known marques such as Porsche and Ferrari, as well as the Chevrolet Corvette, are lifestyle products. Lifestyle products are able to generate fanatical loyalty among their owners and admirers who are willing to put up with any technical and other shortcomings. Lifestyle products are treated almost on par with human beings -- dear friends or relatives -- whom one may love, warts and all, for the emotional bonds one shares with them.
Apple's iPod ain't nothin' if not a lifestyle product. The Zune may have been able to circumvent this obstacle with a truly disruptive product, in the way Japanese automakers entered the US market in the 1970s during the oil crisis, and Korean manufacturers have crept on the Japanese auto turf in the past decade -- selling possibly technically inferior products at a price low enough to bring in customers who couldn't afford a Japanese car. Unfortunately, Microsoft tried to introduce a product that had similar (and in some ways, slightly superior) product for about the same price as the iPod into the same market.
What were they thinking? This seems to be a rare instance of success having gone to Microsoft's head for it's a company that, despite its heft, has always been nimble and alert. Zune found (relatively) few buyers, compared to the iPod which continues to sit on its high, and ever rising, perch far above the lowly spaces occupied by its competitors.
Microsoft stumbled. There is something to be said for carefully analyzing the state of the market even while working on innovations. The market does not take everything you fling at it, no matter how powerful a player you might be.