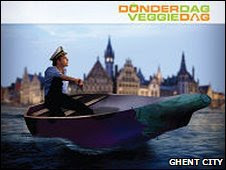 I was first a vegetarian by birth, and later, after a period of rebellion, experimentation, and reflection, became a vegetarian by choice. Vegetarianism in India is just a way of life, not a fetish, radical affectation, or higher cause to be defended and evangelized through political and other means. In the West, however, that's the way it is. Every little difference in a chosen way of life has to be vociferously and strongly defended against the tut-tutting of the so-called mainstream. This is the problem with societies that have descended from enforced monocultures. In India, as long as you don't get to see (or hear or smell) what your neighbour's up to you pretty much don't care. I don't mean to present that as a value judgment but am just telling it like it is.

When Westerners take up vegetarianism, they do so with gusto, like they've seen the light and are embracing a whole new religion. And that's what the historic Belgian city of Ghent (immortalized in many a ribald limerick) appears to have done. But Ghent has taken up this new way of life as a means of highlighting the impact of livestock on the environment. It appears that the collective, um, "wind" passed by the vast numbers of livestock is equivalent to one-fifth of the total greenhouse gas emissions in the whole world. That's a heck of a lot of the stinky stuff, I tell you. Ghent officials also hope to address childhood obesity with this measure.

Very often solutions to pressing problems don't have to be created from scratch -- they already exist somewhere in the world. It needs an alert and observant mind to make the connection and implement the solution. But it often also requires alteration in attitudes and perhaps even fundamental cultural changes. We don't yet know how successful Ghent's experiment will be. Perhaps they will revert to status quo ante due to cultural resistance. On the other hand, other cities and communities around the world, particularly in places where much meat is consumed may notice and attempt to follow suit. Ghent may well launch a worldwide movement. And in the process prompt the composition of less ribald and more appreciative limericks. Here's a weak attempt at one: