Too Zune to tell 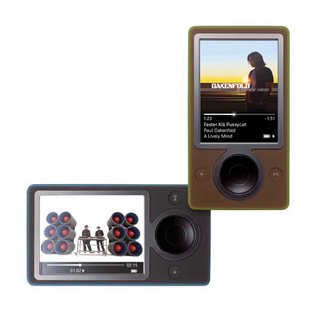 Microsoft introduced its Zune platform yesterday. Zune is set to compete with -- and intended to transcend -- Apple's market dominating iPod. Now in hoary Microsoft tradition, Zune is more than just a product -- it is a strategy, a campaign, a music downloading service, a technology platform, and much more.

Microsoft is following the script burned into its DNA: wait to see what kind of technology succeeds in the market, and then come stomping all over it with a similar, or superior product. This has worked with just about every product that the company has introduced, most recently, the Xbox gaming platform. Market leaders Nintendo and Sony were left speechless by the speed with Microsoft came to claim a large chunk of the gaming market. Clearly, Microsoft hopes to do the same with Zune; after all, it did beat Apple's Macintosh platform with Windows -- a poorer and cheaper knockoff. But with Xbox, Microsoft showed that it could master a demanding market with a quality product too.

iPod users constitute a market much like the gaming market -- they are discerning consumers who are willing to pay more for quality (unlike DOS and Windows users who were willing to put up with abysmal technology in return for a lower initial cost). Apple has a dominant share of a market made up of hundreds of competiting products at every price level, most of which are priced well below the iPod and include additional features such FM radio, voice recording, digital camera, PDA functions, games, and no exclusive tie-in to a single music store.

How does the Zune stack up? Bear in mind that the Zune introduction yesterday was a pre-announcement something that Microsoft typically does to scare off competition and pre-empt potential customers from spending their money on competitors' products. Given Microsoft's repeatedly delayed introduction of its "forthcoming" Vista OS release, it is anybody's guess when Zune will really make it to the market. Nevertheless, Microsoft will likely push to release it in time for Christmas.

Which brings us to the current state of Zune. As you can see from the prototypes in the picture above -- those are officially released Microsoft photographs; no independent pictures of the device have been spotted in the wild -- it looks a lot like the iPod. And in grand Microsoft tradition, that was probably intentional, given Microsoft's me-too approach to things. It is physically about the same size as an iPod (albeit somewhat larger and heavier) and comes in black, white, and brown. Yes, brown. Go figure. It sports a 3" screen to iPod's 2.5" and what looks like a copy of iPod's scroll wheel is just that -- looks. In fact it is a four way navigation device with a center button. The device, in fact is built by Toshiba and is a variant of that company's Gigabeat DAP (digital audio player). Here's a picture of the Gigabeat. See the likeness? All they did was to mask the "plus" shaped navigation control of the Gigabeat by using a circular control instead. In my opinion the Gigabeat looks a lot better than the Zune. But Microsoft probably wanted it to look as much like iPod as possible without inviting the wrath of Apple's lawyers.

Zune's claim to fame is the extra features it sports over the iPod: it includes the usual fare of FM radio and voice recording, but in addition, it includes WiFi. Microsoft's plan is let Zuners share their purchased songs wirelessly with other Zuners who have 3 days or 3 trials to purchase the song themselves. Like the iPod, the Zune will be tied into an exclusive music store, and will be incompatible with Microsoft's Playsforsure DRM technology incorporated into its other DAP platform. So Microsoft will be competing with itself, in addition to Apple.

How will Zune fare? I have an instinctive disliking for Microsoft products so I am likely to write it off. But it is always unwise to "misunderestimate" (in the words of our fearless leader) the 800 lb gorilla from Redmond. While it hasn't always succeeded -- at least with versions 1, 2 and 3 of any technology -- Microsoft's deep pockets have shown themselves to be capable of prevailing in the end.

The screens do look nice with a lot of eye candy, but the product looks rather cheap, overall, and brown just sucks, man. What were they thinking? And will people ditch iPod's scroll wheel for something that looks like but doesn't work like one? And the proposed price of $299 for a 30 GB device with a few more features than the repriced $249 30 GB iPod gives one pause. Besides, Bill Gates' eye is off the ball, what with his new mission to save the world. Stay tuned.

here comes the turd brown zune from the blue gorilla to be the latest ipod's so called killer.

Zune doesnt support open source and other mainstream formats, so the em'Ballmer doesnt want to be smarter than steve. Atleast it should have supported itunes fairplay format, so that it can try to zap in some loosely held valence ipodphiliacs.

DRM ridden formats are a hassle to my freedom. Nevermind, i found a crack to circumvent it. ^_^

It would be interesting to follow up on the battery life, wifi (wireless sharing), heat dissipation and accessories for Zune .So, now its z00casting time?

I read that the shared files on the recipient slip a into self-destructive mode and die after few days. LOL. Nice feature eh?

This is comming from MS and there is wifi music sharing, so, what about anti-virus apps and spyware blockers and hey may be firewalls ?