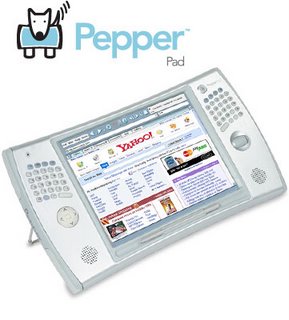 Gee, it's been a while since I've posted anything here. Last post just preceded Spring Break. Not that I have switched off. Anyway, April 1 -- Apple's 30th Birthday -- has come and gone and still no sign of the Revolutionary Next Big Thing. Rumors are that Apple has run into technical difficulties with the fabled Video iPod. Meanwhile, here comes the Pepper Pad (why Pepper? Who knows?). Here I was getting all excited and some simple Googling reveals that it has been around since late 2004, but only now has begun making waves. Or hopes to, anyway. It's got pretty good specs, and it looks good in the picture.

It's not a laptop or handheld or tablet PC or gaming machine but all of the above.

Runs on Linux and will do net browsing, email, instant messaging, music, photos, video,games, and will double as a remote. Looks cool. I wonder about its ergonomics and interface. Take the keyboard, for instanc: if you use all fingers for typing, you need to set it down on a table or your lap. If you hold it in both hands, then you use only your thumbs for "typing" as with a Blackberry or Treo -- not too comfortable for extended typing, but Blackberry users probably will disagree. Short movies might work on the small screen -- better than the iPod, anyway. Battery lasts a "few hours".

I suspect that the developers are a little clueless as to how this will be adopted -- if it takes off at all. I hope it does. More importantly, I hope I can get my hands on this to evaluate it.