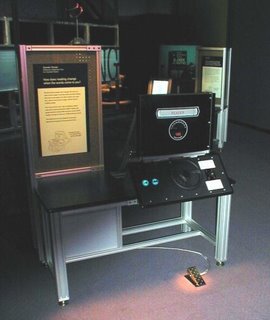 MIT researchers have developed an intersting new experimental reading interface called Speeder Reader where the reader uses a steering wheel to "steer" to various textual material and a gas pedal to scroll the text to the point where the reader's eyes are focused. The gas pedal can be used to speed up or slow down reading.

Blog update: March 16, 2006
Microsoft isn't far behind with this "incorporate foot into interface" trend. They are working on what they call a StepUI as reported by PhysOrg. Here is MS's justification:

"When you drive a car, play a piano or operate a sewing machine, you deftly use both your hands and your feet. Why don't we do that with a computer?" reads a StepUI project description. The project, which currently includes prototype e-mail and photo navigation software, has put forward the idea that while foot-based motions are certainly not more efficient than using a keyboard and mouse, they can supplement the motions and increase efficiency. "

During a demonstration of the technology, an employee maneuvered through several programs via a floor-based dance pad controller similar to the one used for Konami's best-selling Dance Revolution movement game. From then on, he began to navigate through an e-mail program, stamping out unwanted spam mail before moving over to a customized photo program and beginning to organize a photo catalog via the dance pad.

Nice idea, though we can expect Microsoft to mess the whole thing up. Eventually, a teeny three person startup will produce a really good application which MS will buy up and market as its own. MS really doesn't have a choice -- it has too many smart people with too much of of time and money to produce really simple, elegant designs (see my March 16 post on complexity and organizations).