The problem with Microsoft's Origami 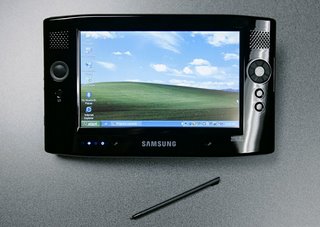 Microsoft introduces samples of its new "Origami" handheld solution today. Another in a long line of full-hearted, but ultimately, misdirected forays by Microsoft into handheld computing. We remember Microsoft's Windows CE which morphed into Palm-sized PC and the PocketPC over four versions before becoming accepted in the marketplace -- and that too only because of MS's corporate presence. Then there have been various versions of Microsoft's Tablet PC which have met with some success in limited niche markets (retail, field sales, insurance).

Any doubts I had about this were dispersed when I read this on The Register:

Microsoft's 'Origami' is no more than a new user interface for a tablet PC - Intel's mini-tablet form factor Ultra Mobile PC (UMPC), to be precise. Intel showed several machines it described as prototypes and reference platforms at its developer forum this week, and we have pictures.

Wintel has been trying to make this kind of computer a success for 15 years, dating back to the WinPad, and Bill Gates hinted at a reborn Tablet almost a year ago. But small PCs have proved to be a graveyard for manufacturers.

'Origami' component is not a new OS, merely a layer on top of Windows. But it seems all you have to do is put up an empty teaser website to send pajama pundits into paroxysms of anticipation.

Read and weep. The article continues:

The drawbacks to a UMPC are immediately apparent. This year's UMPCs have a battery life of just two hours, and will cost up to $1,000. That's twice as much as today's laptops, which are faster, have a more readable screen, and the convenience of a full keyboard.

And twice as much as PDA-style devices, which turn on in a second or two.

UMPCs were trailed as having the form factor of "a paperback book". But few paperbacks weigh as much as 2lbs, and are too large for the pocket.

All the disadvantages and none of the benefits. And finally,

But for now it looks like a heck of a clunker. Great things should be expected next year, we were told.

Ain't that always the case?

Unfortunately, Microsoft looks at all markets only as possible extensions to its Windows frachise and builds machines that mimic Windows' look and feel even if such a thing is entirely inappropriate for the purpose. Palm took off because it had an interface that was just right for handheld mobile needs even though it had no resemblance to desktop interfaces. Absurdly enough, MS builds the PocketPC with a Windows-like interface, complete with task bar and Start menu. And now, Origami has the same Windows-like interface.

The desktop interface is long past its prime -- its heyday was back in the 1980's before the advent of multi-media and the WWW. Today, we need an entire different interface -- and I have no idea what it will look like, but the desktop interface is not it. Let's recall that the desktop metaphor was developed at Xerox in the 1970's to support the activities of Xerox - "the document company'. Computing has gone far, far beyond "documents". A typical home computer has tens, if not hundreds of thousands of files -- a far cry from the dozen or so desktop documents one saw on a typical Xerox Alto machine in the 1970's.

We need leadership and creativity to generate new interface paradigms for 21st century interfaces -- but we are unlikely to get that from Microsoft. Despite being the best-endowed It corporation in the world both financially and also in terms of intellectual talent, Microsoft has become another General Motors -- a cynical purveyor of mediocre products. Perhaps we need to await for the IT equivalent of the 1970's oil crisis to shake up the marketplace.