The impact of Organizational Complexity on Design 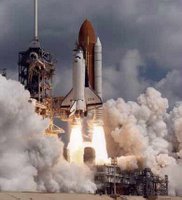 A few things we can say about design and organizations in general. Simple organizations (typically) can only produce simple designs (products, services). Complex products and services are possible only from complex organizations.

While the essential Space Shuttle concept is very simple -- send it up into space like a conventional rocket and make it land like a conventional airplane -- the Shuttle project and mission is a highly complex operation. Practically every aspect of the shuttle mission requires highly specific yet advanced expertise that is a product of innate talent and years, perhaps decades of experience. The Shuttle mission is a mind-bogglingly complex project that could be accomplished only by means of an appropriately complex organization -- NASA -- made up of thousands of individuals working separately, but in a co-ordinated manner, on distinct aspects of the mission.

The complexity of NASA could have been predicted from systems theorist W. Ross Ashby's Law of Requisite Variety which in essence states that "variety absorbs variety" -- in the instance of NASA, it implies that a project as complex as the Shuttle Mission could be accomplished only by means of an organization that matches it in its complexity.

The above discussion leads us to the following assertion:

A. Complex designs emerge only from complex organizations

B. Simple organizations can produce only simple designs

Note the lack of symmetry in the above assertions: the one leads from design to organization, while the other runs in the opposite direction. It gets more interesting. Two non-obvious corollaries derive from A and B:

A-2. Complex organizations can produce only complex designs
B-2. Simple designs emerge only from simple organizations

Large, complex organizations find it almost impossible to produce simple, elegant, easy-to-use products. Such products seem to emerge primarily from small organizations. New ideas and innovations tend to be relatively simple -- it takes time to build up the complexity of a new idea. New ideas in the raw are relatively transparent -- their purpose and usage is often directly and immediately evident. They address one or a few needs very well and in a manner that is clear to a user. Over time, as the organization grows in size and complexity, the new idea takes on many new features and aspects, baggage heaped on by other elements of an increasingly complex organization. More often than not, the original design begins to feel the strain and eventually collapses under the all the added weight. At that point, it is time for a new design to emerge.

Why do organizations grow in complexity? Further, as they complexify, why does the product become increasingly complex? Success brings with it affirmation and money, and a need to feed the demands of the marketplace. Such demands can be addressed only by taking on more people and activities -- more complexity. Over time, the additional people feel the need to justify their presence and leave a mark on the product or service by increasing its complexity. Over time, their emotional investment in or clarity of understanding of the original design or its purpose ebbs, and even might vanish completely.

Many corporations -- including Apple and Microsoft -- tried producing handheld devices, but tiny Palm was the first to succeed in the marketplace. Because of its limited resources it was capable of producing only a simple and elegant solution which, for that very reason, was wildly successful. Microsoft and Apple, despite -- and indeed, because -- of their large size and complexity, could think and design only in complex terms thereby generating unsuccessful designs.

Palm succeeded, but in the end, that success caused the founder, Jeff Hawkins, to leave and establish a new startup called Handspring which returned the PDA to its basics. Eventually, Handspring designed the very successful Treo, which was acquired later by Palm and is now its most successful product. So successful has Treo been, in fact, that practically every PDA phone that has come into the market rips-off ... er ... is inspired by ... its design.

Another successful design from a tiny, simple organization is the RIM Blackberry - it has a fanatical, cult-like following.

Windows will never, ever become an elegant design -- MS is far too complex an organization for that ever to happen. In fact, MS can never again produce a simple design -- it goes against their DNA.

How does one explain Apple's iPod, then? No one can doubt that it is indeed a very simple and elegant product -- too simple, too lacking in bells and whistles, by some accounts. While Apple is a large, complex organization, the iPod itself came from a small group under the direct supervision of iCeo Steve Jobs. The original idea for the iPod in fact is believed to have come from a small startup that Apple swallowed. Apple under Steve Jobs has stuck to its fanatical refusal to complexify its product line, and as long as that situation prevails, one can expect more simple and elegant designs from them. Here's some insight into the contrasting styles of Steve Jobs' Apple and Bill Gates' Microsoft with respect to design, from a Macobserver article:

Mr. Ligameri's experience at Microsoft was decidedly different, beginning with the contrasting management styles of the two companies. No Microsoft executive plays such an active role in the development of design like Mr. Jobs does at Apple; executives prefer to delegate design to the experts and stay out of it. Whereas Apple developed Mac OS X in complete secrecy and released it without any user testing whatsoever (a point Mr. Ratzlaff acknowledged surely led to some of the more glaring shortcomings that were corrected with Mac OS X 10.1), Microsoft has a penchant for demonstrating software long before its release, a poor and often frustrating decision in Mr. Ligameri's opinion. [Ratlaff worked on MacOSX at Apple and Ligameri on Windows XP/Vista at Microsoft. Both now work for Frogdesign. - ed.]

One person's dictatorial control over a design actually led to simpler designs, even though it might result in, possibly, an incomplete feature set. Delegating a design to a "team of experts" results in a "more complete design" which is typically more complex. Those who go for usability prefer the simple design; those who prefer functionality prefer the complex design.

There is a more detailed report on the Ratliff/Ligameri panel discussion at Functioning Form. Note especially:

What were you trying to accomplish with these release of your operating system?

Apple has been criticized for hiding too many features and actions from users. Microsoft has been called out for making things too complicated: too many options at once. What drives these differences?

The last point made by MS is funny yet true. Here's a post from leading Web 2.0 outfit 37signals' Signal vs. Noise blog:

Innovation more often than not comes from constraints. From not being able to blow billions without immediate needs for returns.

One of the first things Jobs did when he returned to the helm at Apple was to slaughter the unprofitable product lines and focus the ship. Not launch a ton of initiatives on top of what was already there.

And finally, read this one: Why features don't matter anymore: The new rules of digital technology. Key points: Less is more; user experience is paramount. Wow, this is getting more and more interesting: This post says, Complexity is the reason for 50% of customer returns. If you have the bandwidth watch this really well-done and amusing YouTube video on how Microsoft would complexify iPod's packaging.

Given the contrasting benefits of Usable Simplicity and Complex Functionality (note the asymmetric adjective-noun pairing) it is impossible to pick a single winner; opinion will be divided based on individual preference for usability or functionality. Indeed, the cultlike animus that exists between Mac and DOS/Windows users is typically founded on this preferential contrast.

Interestingly, there are critics of Usable Simplicity even among the pantheon of Usability Experts. User Interface God Don Norman is none too impressed with Google. He says:

Look, I like Google. It's a great search engine. But I am sick and tired of hearing people praise its clean, elegant look. Hell, all search engines have that clean elegant part to them: type your search terms into the box and hit "Enter."

"Oh," people rush to object, "the Google search page is so spare, clean, elegant, not crowded with other stuff."

Why are Yahoo! and MSN such complex-looking places? Because their systems are easier to use. Not because they are complex, but because they simplify the life of their users by letting them see their choices on the home page: news, alternative searches, other items of interest. Yahoo! even has an excellent personalization page, so you can choose what you wish to see on that first page.

Is Google simple? No. Google is deceptive. It hides all the complexity by simply showing one search box on the main page. The main difference, is that if you want to do anything else, the other search engines let you do it from their home pages, whereas Google makes you search through other, much more complex pages.

Don Norman might be God, but mere mortals -- countless millions of them -- still appear to count on Google. Here is a sample of comments on Norman's essay:

Perhaps the people who praise Google (myself being one of them) are simply using the search engine to do just that—search. When landing on the Yahoo! page, the numerous options are distracting, almost to the point that I forget why I came there in the frist place.

Google’s design is conducive to focused work. It may require more clicks to find the tool you want, but when you get there you can be more productive.

You can’t be all things to all people, so Google have decided to build a great search engine and make it blindingly obvious on the homepage that that is the core of what they want you to do.

Personally I prefer this approach to the information overload of Yahoo or MSN. I don’t have to think about whether I’m looking for X, Y or Z; I just search.

In the case of Google, I suspect the overwhelming use is for general web search, so other features perhaps do belong a page deeper. Of course, by sticking other features deeper in the hierarchy, the high frequency of using Google for general search only tends to be a self-fulfilling prophecy, but maybe that’s a business decision that Google took consciously. Or maybe they figured that if a user really uses something like Google Scholar, they’ll have a direct favorite to it, pushing the decision to yet another level higher in the hierarchy.

Don Norman may have become a victim of his own expertise: he knows so much about the subject that he has forgotten what it is like to be a regular user. Google is a very large organization today, and that itself would make it rather complex. It is to Google's credit that it has defied that odds and manage to retain the simplicity of the idea and design that launched the company. This requires effort and focus -- and perhaps a certain dictatorial oversight -- much as in the case of Apple under Steve Jobs.

What do you think about these mysterious places?