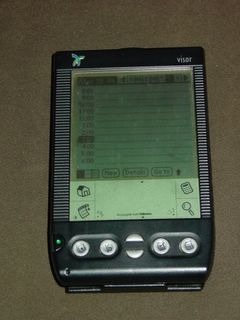 One week ago, my Handspring Visor Deluxe Grapite (products just don't have simple names anymore), my beloved and trusted companion of four years, almost to the day, died. Like in the Monty Python skit, it gave up the ghost, kicked the bucket, met its maker, popped it, croaked. Well, it started dying and is as good as dead, having become uncommunicative and rapidly losing its memory. Let's just say it is dead.

I couldn't believe the day would come. Especially since I hadn't backed up the thing in five months. Luckily, my social calendar has been rather slim in recent times, and not much has been lost (I think).

I bought my first PDA - another Handspring Visor Deluxe - but Ice, a translucent white - in March 2001, for @ 249 plus tax from the local CompUSA. I had been eyeing PalmOS PDAs for a while, but could not justify the high price. But then, Jeff Hawkins [also here, here and here], the founder of Palm, left to found Handspring and the price became low enough that I couldn't hold myself anymore. I was the proud and loyal owner of this device for 10 months until some evil troll stole it from my office. By then I had become addicted and couldn't wait to get another one -- and couldn't justify paying another two and a half large clams. I found a deal at the Handspring website for a refurbished Graphite (i.e. Black -- you gotta have a fancy name) Visor Deluxe for just $99 and free shipping. I wondered if it was worth buying a refurbished device. Now I wonder no more -- it has lasted longer than many new ones.

Since 2002, Palm's fortunes have waned. Microsoft's PocketPC is now ruling the roost. MS offers you the benefit of buying an inferior PDA -- except in color and with all kinds of unnecessary features -- for many hundred dollars. I ain't interested. The Palm's merits were manifold -- it was:

What more could a person want? In contrast, PocketPC is:

> complicated -- and in fact, mimics Windows (why, pray, on a handheld?)
> expensive
> crappy
> slow

What more could a person hate?

But MS is able to get away with it. I am desperate for a replacement, but cannot accept PocketPC. But Handspring has been swallowed by Palm and now has slimmed down its product range. The new products are much less reliable, much slower, much more expensive, run only on hard-to-remove, proprietary, rechargeable batteries ... you get the picture. And the only low end Palm -- the Zire 22 is also reported on Amazon as being rather unreliable. What's a body to do? I found a used Handspring Visor Graphite on Amazon for $49. I hope it works, for I have already ordered it. Maybe it has already arrived in my mailbox at work. I await, anxiously.

By the way, Hawkins is a genius. He's just about as old as I am and has been elected to the National Academy of Engineering.