Of Mouse and Me 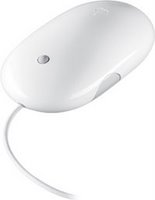 On the theory that that which does not infuriate you, brings you joy (paraphrasing Nietzsche), Apple drives me up the wall when it goofs up precisely because it does so many things so well, that you expect them never to make mistakes. Certainly not intentional mistakes, if there were such a thing.

With that preamble, let me say that the Apple Mouse -- not the Mighty Mouse with a track ball but the one prior to that -- sucks big time. And that, dear Apple, infuriates. What's wrong with the mouse? Let me list the problems:

1. It is hard and unyielding, making you constantly aware of its presence. The best kind of mouse should vanish from your consciousness and become a seamless extension of your hand.

2. In keeping with the above goal, the mouse should be shaped such that it fits nicely into your cupped palm, ideally making total contact with it. Apple's mouse looks like it would achieve that goal but doesn't -- it sits much too low to make that possible. (Apple did indeed experiment with form-fitting mice, but never released one to the market.)

There are lots of wonderful mice in the market, none of which look as elegant Apple's but which take you closer to the ideal of the disappeared mouse. ("Disappeared mouse" sounds a lot like "surrendered wife" -- I wonder if they are related.) The current mouse, of course, is far superior to the circular, "hockey puck" mouse which debuted on the original "Bondi Blue" iMac. That mouse is practically unusable. Let's face it: Apple chose style over function with its mice, and refuses to give up on this practice.

Before the advent of the Mighty Mouse there were other problems that Apple consciously and stubbornly refused to address:

1. A single mouse button -- in this day and age Mac users were compelled to use the command key in order to invoke the functions of the second button.

2. No scroll wheel -- this was a usability masterstroke from Microsoft, an organization not known for such feats.

With the introduction of the Mighty Mouse, Apple has dealt with both these issues in its own Applish way, which involves healthy doses of NIH (the Not-Invented-Here) syndrome. Both (all four, in fact) mouse buttons are completely invisible and a small rubber ball performs the function of the scroll wheel; they're Apple, they don't copy Microsoft! I've tried out the Mighty Mouse (only briefly, I confess) and found these features take some getting used to. But according to many MM users they work absolutely great.

As you said Apple has chosen to make a pretty mouse rather than emphasize function. Like any company this is likely to come from what they perceive to be their user base. Perhaps you are the only Apple user that doesn't prefer to surround themself with pretty things.

Actually, I do like to surround myself with pretty things, Brooks. I just wish the pretty things were functional too!

PS: If you visit the AskTog site, you'll see many comments from The Tog slamming Apple's design decisions. But as an Appleite himself, he prefers the environment to the alternative.

By prefer I meant that it was more important than functionality :( Macintosh's are a very pretty and capable of doing very pretty things. I think this is what causes them to lose focus on functionality, they have a reputation to keep up ;)

I suspect that the loss of focus is not the fault of Apple's usability gurus but a fallout of "management decisions", including fatwas from on-high (i.e., The Steve). The jelly-bean eye-candy theme that I loathe is very likely another one of those Steve Decisions.