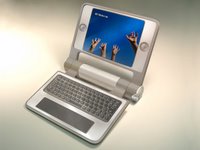 One Laptop Per Child (OLPC) is the acronym for the proposed "$100" (that's the plan) "computer for the developing world". Can it be made to happen? Let's focus on the design for now.

At first glance, it looks pretty neat. That's at least half the job done. And coming out of the fabled Media Lab one can expect at least as much substance as style. So let's look beyond looks.

OLPC has integrated handle for carrying in which is located a "power module" (which I assume is a battery). It also has a hand-cranked power generator. It has a spill-proof keyboard and an extended digitizer below the eyboard which can be used for freeform input, including cursive handwriting in any language. The screen can also be written on like a tablet PC. There are two trackballs located on either side of the screen for manipulating objects, menus, etc. on the screen. I am a little thrown off by the trackballs which can quickly gum up and die. OLPC can also be folded like a book and be used as an e-book for reading and for running video.

There's a FAQ with more details: Linux-based, full-color , Wi-Fi , 1 GB RAM, 1 Megapixel display. A bunch of OLPC can autodiscover each other and form spontaneous networks.

Portability was a key concern in design, aside from ruggedness. Can they do it? The field of high-expectations computing is littered with failures. Let's hope, though.

It is so refreshing to see you writing about something again in a sustained way. Despite the Mac-centric theme here, I think you have the making of a new intellectual project here that blends your interest in teaching and thinking about user interface design. I'm not even a techie and I'm facinated. Well, okay, I'm a wanna-be geek.