Steve Jobs: the man, the myth, the machine 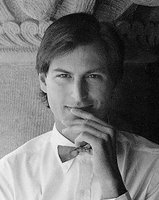 Since we've been covering Apple the past nearly all blogs, it probably makes sense to make at least passing reference to the man who personifies Apple -- Le Pomme Grand hisself, Steve Jobs. There is an article on the mythful man in the Independent that I am too cheap to pay for (it costs a pound), but here are the opening paragraphs (available free):

He's chief executive of two of the most powerful technology brands in the world: Apple and Pixar. But what motivates Steve Jobs? And how does he choose a new washing machine? Charles Arthur investigates

Imagine the scenario: a billionaire walks into a mobile phone shop. The sales assistant says, "Can I help you?" but gets the reply "Just looking, thank you." The man tries a few phones, lifting his glasses to look at the detail of the display. He presses a couple of buttons. He shakes his head. He could buy any phone in the shop; in fact he could buy the shop, or even buy the chain. But he doesn't. He walks out, empty-handed.

It sounds like an urban myth but it could be a day in the life of Steve Jobs, who is chief executive of two technology companies that are admired both inside and outside their respective industries: Apple (which makes the iPod and a range of computers) and Pixar (which made the films Toy Story and The Incredibles). Apple made him a multi-millionaire, Pixar made him a billionaire, and the two mean that at the age of 50 he has cemented a unique position as a force in computing, consumer electronics (through the iPod), the music business (the iPod again) and Hollywood.

Wow, gee, that sounds like Harriet Miers talking about her favorite former Texas governor ("the most brilliant man I have met")! I guess there is enough there for you to guess what the rest of the article is like, so for you cognoscenti, here's the Slashdot discussion which tears the issue to shreds like so much taffy. Anyway, the key takeaway here is that there are two Steve Jobs: Steve the Good and Steve the Bad, and they are both true. Enough material here for a Shakespearean drama? You'll find votaries of both in Slashdot. I guess that is what it takes to create "insanely great" designs.

Incidentally, Steve Jobs was born to an unwed graduate student mother who gave him up for adoption. His recent Stanford University Commencement address where he talks about his life and lessons is a worthwhile read. His biological father is rumored to have been an Egyptian Arab student. Jobs is also the inventor of the Reality Distortion Field which he has employed very effectively over his lifetime.